Dragon Ball Legends content rating is Everyone. This app is listed in the Action category of the app store. You could visit the Play Store website to know more about the company/developer who developed this. Dragon Ball Legends Game can be downloaded and installed on android devices supporting 15 API and above. Download the app using your favorite browser and click on install to install the app. Please note that we provide original and pure Apk file and provide faster download speed than Dragon Ball Legends Apk mirrors. You could also Download Dragon Ball Legends and run it using popular android emulators. 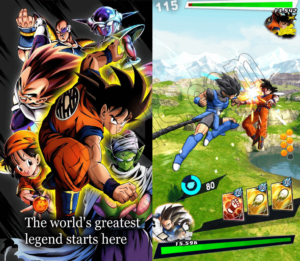 Dragon Ball Legends is the ultimate dragon ball experience on your mobile device! This DB anime action RPG game features epic 3D visuals and animations to help tell the original story based on the brand-new character designed by Akira Toriyama, the mysterious Saiyan known as Shallot! Join Shallot and the rest of your favorite dragon ball characters to help regain his memory and save the world!

Summon your favorite characters from popular dragon ball anime series, such as DBZ, DBGT, to DBS! From popular heroes such as Goku, Gohan, Piccolo, Tien, and Krillin, to evil villains such as Frieza, Cell, and Majin Buu, all of your favorite anime DB characters are ready for battle! Are you?

Enjoy 1 on 1 anime fighting action against Friendly or Rival DB players from across the globe in live PVP battles! Enter Ratings Matches with your favorite dragon ball characters and earn Rating Points and Rewards! Or gauge your strength in non-ranking casual matches for fun battles with players of similar power.

How to Download and Install Dragon Ball Legends APK